In training course 550 (see Full Immersion Course) I included a small section on showcasing the integration of the Intershop Commerce Management with other systems and tools. I was thinking about having some bit of fun. A few things to just see, relax, sit back and cool down after one week of training with persistent objects, business objects, pagelets, isml and a lot of code writing. And a few things that might inspire you to work more with Intershop and apply your learned knowledge.

As I know from one of the previous Hackathons: We had a team that developed a simple Alexa skill (thanks to Mario and Dorina) quering ICM data. So I mentioned it in this section. In case trainees were interested and wanted to know something about it I could always pop up the slides of that event. However, many asked for much more than only a presentation slide as I must have been not the only one that found that topic interesting. They also wanted to know how to develop such a skill. So I asked myself: Can I serve the data we prepare in our training course for use within the ICM also be served on an Alexa device?

This is what I found out.

From an infrastructure point of view we need Alexa devices, the Amazon developer portal, end points and any number of web servers.

Having no Amazon Echo or Echo Dot nearby I downloaded an app for my smartphone, created an account on the Amazon developer portal, opened a new account on AWS for me and started the Intershop7 application server from the training. So far so good.

As mentioned above I wanted to serve product storage information from the warehouse use case. It is the use case we train all week in the course. It made sense to call my skill WarehouseSkill, right? Whenever it comes to the creation of such a skill, Alexa has the following terms you need to learn:

So, this is my final IntentSchema definition file (the MyProduct type is custom and enumerates the products we have in store):

I know that’s not enough, one might also say: Is product Sony still available? Or: Is Sony still on on stock? A skill is often as good as the definition of its utterances. However, I am fine now with two utterances for testing. Surprisingly, it took me a while to declare the slot. In a first attempt, I used productID as the REST call on the ICM needs the productSKU. However, no matter what slot type I used and then said, my slot variable was always empty. I guess, productID is kind of a reserved word. As soon as I changed it, it worked.

I followed the standard approach in the first try and went to AWS. Logged on, typed in Lambda in the search bar and then created a new lambda function, called also WarehouseSkill. I hoped that if the skill and the serving endpoint have the same name, they might like each other and do whatever I want them to do (..smile..).

I am surely no expert in JavaScript programming, but all I needed to do was:

It went on quite smoothly.

2. For calling REST servers you find brilliant code in the Internet. The fewer the code lines, the better. I simply made:

Make sure you handle the asynchronity of Node.js! Otherwise you end the skill before the response from the ICM has arrived.

3. In above mentioned training course we create a REST response that looks as follows.

So, I had the country name in the URI as a last part, the stock in the value. A simple loop and split did the trick and my output text was ready to be sent back to Alexa. 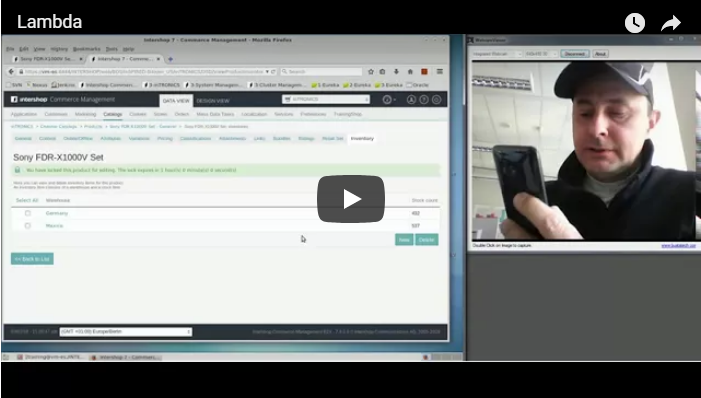 I immediately replaced the mentioning of the Alexa integration in course 550 with a task. That is nothing you should just see on a slide, you should do it. It’s fun. You can play around with it and have Alexa saying whatever you want.

In retrospect, things that took some time, were:

Things that worked out right away were:

Now I ask myself: Why are we not offering more speech services to our customers? Services like a Alexa, can you let me know when my order number 123 will arrive? Or in the B2B business, standing in front of an empty shelf in the warehouse: Alexa, please put nails 543 in my inTRONICS wishlist. A lot of services can be provided upfront (product information, product selection, product wishlisting) and after sales (order information, order delivery, similar product suggestion). Services that are not difficult to implement, do not conflict with privacy data protection laws and your customers might really like them!

Creating a simple Alexa Skill
Tagged on: Alexa    JSON    REST    Skills
This website uses cookies for analysis and marketing purposes. Click on "OK" if you agree to the use of cookies. You can object to the use of cookies by changing the settings in your browser. Further information on cookies can be found in our Privacy policyOKNO
You can revoke your consent any time using the Revoke consent button.Revoke Consent